I have to tell you, this is one of my favorite meals to make. After the first few runs, you learn what works for you, and what doesn’t. We lost many pizza shells the first few times. Sad, sad. But, now, we pretty much have it down. 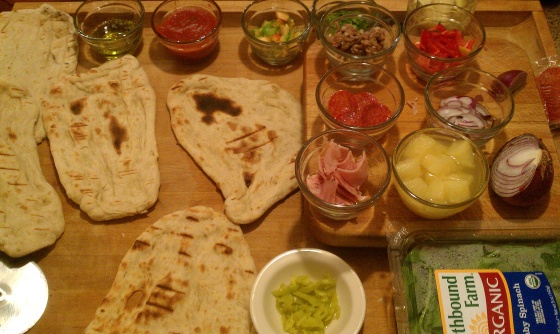 Grilled pizza shells, and our toppings of choice.

Even though there’s only 3 of us, we have widely varied tastes.  One only wants spinach and pepperoni on hers.  The other wants ham and pineapple. And he also wants artichokes, sausage, pepperoni and banana peppers.

Me?  I want a pizza magherita, with just tomatoes, good mozzarella (any kind, really), and some fresh basil.  I’ve also been know to add anchovies OR eggplant to one’s spinach and pepperoni pizza.  Either one is great.

Yeah, we work with a lot of toppings.

Find a good pizza dough.  There are several methods: a few hours or a whole day!  I’ve done both, the quick method, and the long method which uses a “poolish” which is an extended sponge.  If you have the forethougt and the time, the long method tastes best, but, with the  grill, (and not overworking the dough), the quick method is good, too.  Today’s pizza was made using the quick method.  I started making a poolish, but, after 30 minutes realized it would not be ready in time, so, started a second batch of “regular” pizza dough.

One with a bite taken out….yummy!