One month after Hurricane Isaac, the Covington Farmer’s Market is in full swing again.  This is most of the bounty that I picked up today: 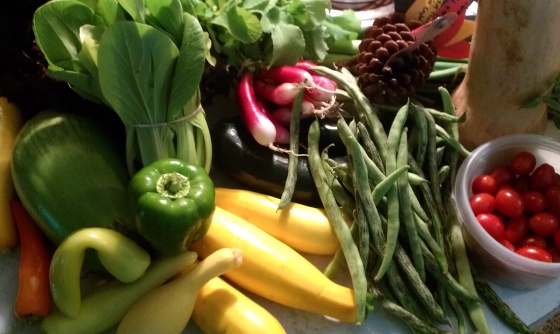 The growing season is long here in south Louisiana, and some of the gardeners have greenhouses, but I was still quite impressed with what was available today.  Large green onions, snap beans, golden and green zucchini, yellow squash, redleaf lettuce, baby bokchoy, Patricia radishes, butternut squash, peppers and bell peppers.  There was even pattypan squash and baby pickling cucumbers which I passed up.

In addition to the produce, there were satsumas, shrimp, locally produced wine (which is grown just about 5 miles from my house), milk, butter, cheese, and yogurt, meats, eggs.  One of the vendors who was missing was the guy who has the orange orchards in Braithwaite, Louisiana.  This is one of the towns that sustained heavy, heavy flooding to a levee breech during Hurricane Isaac.  He was my source for the sweet or sour kumquats, Meyer lemons, navel oranges, juice oranges and grapefruit.  I’m hoping that his orchards only sustained temporary damage and that he will be back next year.

Our farmer’s market was a little crowded today, as there were many extra vendors there, already selling stuff for the Christmas season.  Several years in a row I have given Farmer’s Market gift bags, filled with honey, soap, salad dressing, and kumquats!

The long radish on top is the Patrica radish.  I’ve actually been thinking of this radish all week long, and was happy when I found it.  The little round radishes are actually from my last trip two weeks ago.  Both delicious!  Crisp and peppery, they are good added to any salad.  There’s been a few books I’ve read where they talk about eating crisp radishes with a little bit of fresh butter, with a sprinkle of salt on them.  In one story, a couple was actually brought together because they shared this love.  For years, I always thought, how wierd, to spread butter on something so crisp and healthy…but, it’s actually good!  Like any dairy product, the butter cuts the pepperiness of the radish, and the salt adds a little seasoning. 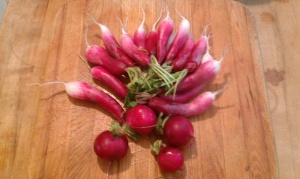 Seek out your farmer’s market, you may be surprised at what you find there!
Buen provecho!