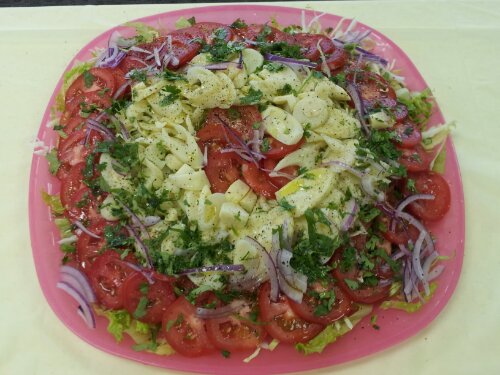 My contribution for Hispanic Heritage Month.

It’s the kind of salad that might be served in any Central or South American country, or even the Caribbean islands.  Due to historically poor refrigeration, both in transportation and in the stores, lettuce has never been real big on the menu when I was a kid, but cabbage was omnipresent.  Things may have changed over the years.

But back then, shelf-stable items such as cabbage, tomatoes, and avocadoes (free, if you have your own tree in your backyard) along with a few pantry items like hearts of palm, vinegar, oil, and salt and pepper make for a very fine salad back in the day.  Cilantro?  Parsley?  Again,…there was that refrigeration issue.  While the two remain a staple in the Venezuelan classic sauce “Guasacaca”, sometimes you just didn’t want to buy them because they were so wilted.  However, in the rainy season, you stood a much better chance of obtaining such delicacies, because the temperatures were a little cooler.

As far as salad dressing?  Well, there was oil and red wine vinegar on every restaurant table we visited.  That was your choice.

This really isn’t a recipe, more of a process.  How big is your platter?  How many are you serving?  This tray is about 15 inches by 15 inches, and I made two of them.  There is quite a bit of shredded cabbage underneath the tomatoes and hearts of palm.

I used a little bit of shredded greenleaf lettuce, lots and lots of shredded cabbage, lots of tomatoes, a few cans of hearts of palm (sliced on the diagonal), lots of avocados, some cilantro.  Drizzle with white wine or red wine vinegar or lemon or lime juice, olive oil, salt and pepper.  Last year, I used lime juice; whichever is on hand is good.  I did purchase about 10 small Haas avocados, which I left at home that morning.  But, avocados are perfect on this salad.

Went great with all the other dishes today: 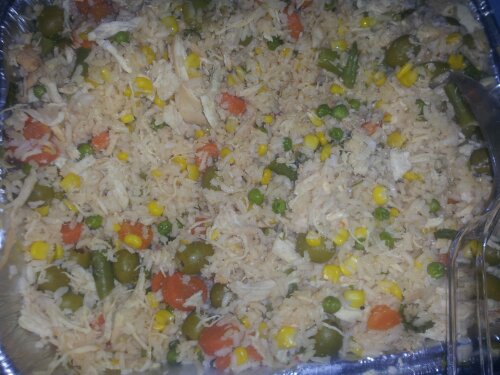 I love that they keep the olives and the canned peas in this Arroz con Pollo, a carryover from traditional Spanish and Portuguese cooking.  These touches are prevalent throughout nearly all Central and South American countries. 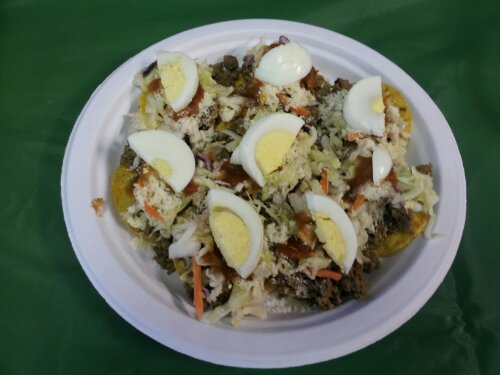 Guatemalan Enchiladas; apparently we forgot to put the sauce on these!