Okay. Well, it’s almost her pizza. If you haven’t heard of Vivian Howard yet, you probably will soon. 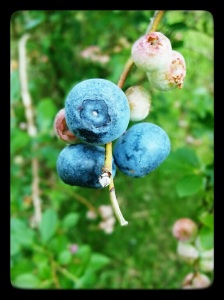 She is the subject of a PBS show, a documentary really, called A Chef’s Life. It allows one to see the trials and tribulations of owning a small restaurant, the rewards of owning a restaurant, as well as a chef’s attempt at highlighting locally sourced foods at the peak of their season. Pecans, sweet potatoes, muscadines, summer tomatoes, and blueberries, just to name a few.

One of her most successful items at the restaurant is her Blueberry BBQ sauce. So successful, in fact, that they started bottling the sauce for sale. Pretty neat.

This past summer we had a bumper crop of blueberries ourselves, and I was looking for a way to use all these blueberries besides putting them in the freezer and making jam. Enter Ms. Howard. Finally, a savory way to preserve these blueberries! There is a post where I documented the sauce.

Recently, we finally tried the sauce on a pizza with crispy pulled pork, a really good cheddar, and red onions. A little different from the one she served at her restaurant, which includes roasted chicken, smoked Gouda, red onions came jalapeños.

No recipe here, as the BBQ sauce and pizza dough have already been posted. 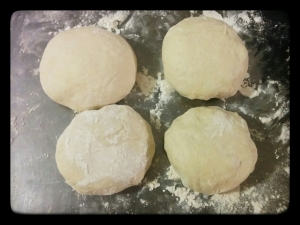 Start with your favorite pizza dough. 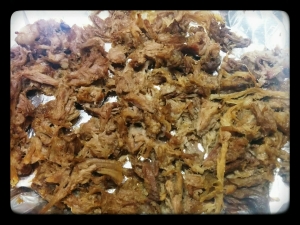 Crisp up your pork or chicken in a skillet. 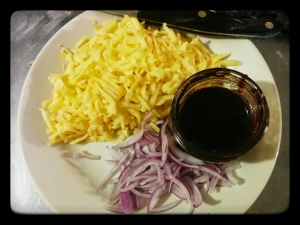 Assemble the other toppings while the meat is crisping up. 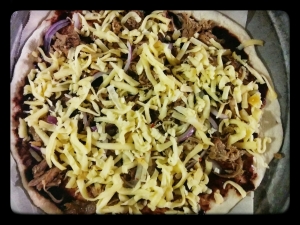 Put it all together, drizzle a little more sauce on top, if desired.  And, bake it in the oven. 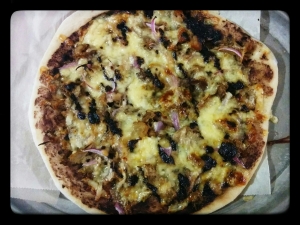 If you have a bumper crop of blueberries next year, or a bunch stashed in your freezer from last summer, the sauce is definitely worth trying.  Get the blueberry BBQ sauce recipe here.

How was it? Everybody was really surprised at how good it was. The combination was a great contrast of flavors- sweet, sour, meaty, and a bite of spice from the onions. Next time, I think I would make sure to use either a smoked meat or either a smoked Gouda or Cheddar.