Because homemade is always better.  And it’s even better when you’re 12-year old brings home the recipe, and now it’s part of her own recipe repertoire. This is super, super simple.  If you are a fan of (most) restaurant salsa’s, … END_OF_DOCUMENT_TOKEN_TO_BE_REPLACED

Easy pinto beans. These may be left juicy and served as a soup, or reduce the liquid, to serve as a side.  Or, puree or mash and serve warm with some chips topped with chips and jalapenos as an appetizer … END_OF_DOCUMENT_TOKEN_TO_BE_REPLACED 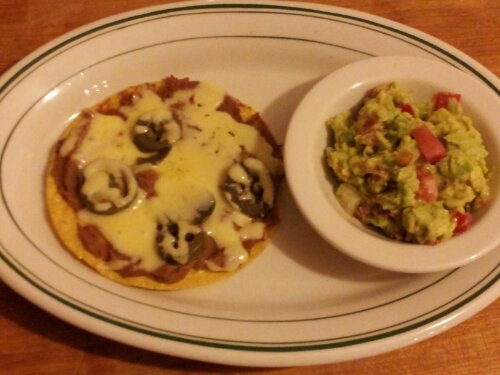 So, at the young age of 8, my daughter has learned firsthand that what she eats has an effect on her health.

So, the other day in the car, I brought up the concept of Meatless Mondays. By giving her examples of some of the potential meals we could do (and no negatives about meat itself), she was all for it. She was so for it, that she was upset that she had meat for lunch at school the last 2 Mondays.

The best part about Meatless Mondays is that a lot of vegetarian dishes are also quick and easy to prepare, a definite positive for a Monday night after a busy weekend (any weekend!)

So, for our first official Meatless Monday, I took the easy path and served them something they both love: Bean Tostadas with fresh Guacamole!

Using premade tostada shells and canned beans, the hardest part was making the simplest of guacamoles, and grating the cheeses.

The easiest, simplest guacamole is the best.  Let the avocado shine through, without too many other ingredients.  This makes a tasty afternoon snack. These quantities are very flexible, but, here are the primary ingredients: 1 ripe Haas avocado 1 to … END_OF_DOCUMENT_TOKEN_TO_BE_REPLACED

Well, I have no pictures of this one, even though I made the soup twice this past week.  It was just that easy and that good.  Of course, it helped tremendously that Chris had a taco craving!  He made three … END_OF_DOCUMENT_TOKEN_TO_BE_REPLACED